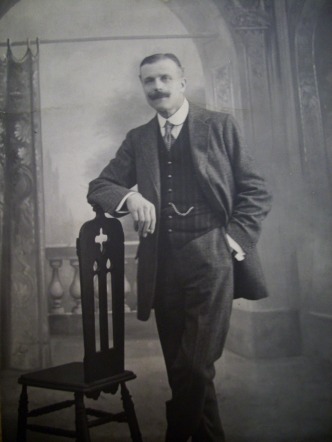 Roger Fry is famously associated with the inception of The Burlington Magazine, but credit must also be given to its first Editor, Robert Dell [photographed here]. A Christian socialist writer in London, then Anarchist art dealer in Paris, and finally exiled political journalist in America, Dell’s life was lived outside a conventional professional path and it is perhaps because of his atypical existential choices, varied output and militant politics that now he is largely forgotten.

In his youth Dell frequented the Socialist circles of William Morris, and edited the newspaper Sussex Mirror. Subsequently Dell was one of the Directors of the Connoisseur, a successful British art periodical for collectors, founded in 1901 and edited by Herbert T. Baily. Dell’s writings for the Connoisseur, signed with the initials RED (an apt acronym for a Socialist) express critical reflections in the wake of the Arts and Crafts Movement, such as the conflict and interaction between aesthetics, use value and commercial value of works of art.

For instance, in April 1902 Dell wrote about Michael Tomkinson’s Japanese collection [illustrated left, p. 219]. Dell, instead of merely praising the taste of the collector, as other contributors for the Connoisseur did, and thus turning his article into a modern panegyric, focused his analysis on the differences between Japanese and European aesthetics. According to Dell, the Japanese, like medieval Europeans, ‘aimed at beauty in everything they made’ and never ‘made the useful and the ornamental two separate and mutually exclusive categories’. There are strong echoes of Morris’s thoughts in these statements, which recall his famous exhortation, ‘Have nothing in your houses that you do not know to be useful or believe to be beautiful’ (The Beauty of Life, 1882, p. 53).

Dell proclaimed an uncompromisingly idealistic belief of the incompatibility of art and commerce: ‘Neither a man nor a nation can serve art and mammon at the same time’, he wrote. This is perhaps an unexpected sentiment to be found in the pages of a magazine dedicated to the very commercial activity of collecting, and which made of the summary of art sales its raison d’être. It was, however, a position shared by many art writers at the time, who professed ‘disinterested’ idealism while at the same time participating in commercial (and therefore very ‘interested’) enterprises.

In 1902 Dell left the Connoisseur to found The Burlington Magazine together with other writers such as Roger Fry, Bernard Berenson and Herbert Horne, who also shared, albeit in a less radical way, his progressive leanings and wanted to create a ‘disinterested’ space for writing about art (a space which was, however, still financed by private capital). In the first Editorial of the Burlington (I, pp. 3-5), Dell expressed again his idealism, in an eloquent tirade against false sentiment in modern art, against ‘the tyrant bourgeoisie’, against consumerism and, especially, against the accumulation of works of art for monetary gains. The art of the past was proposed as remedy for the contemporary malaise, to fend off, as Dell had already written in the Connoisseur, the much-feared ‘ultimate triumph of the Cheap and Nasty’.

Following the mounting financial troubles of the Burlington, and the disapproval of Fry, Dell was demoted to share the Editorship with Charles Holmes (later Director of the National Gallery) from January 1904 until October 1906. Dell then moved to Paris where he opened an art gallery, ‘Shirleys’ [illustrated left from an advert in the Burlington in May 1906], and wrote as art correspondent for the Manchester Guardian, Nation, and American Art News. From April 1907 Dell was also French correspondent for the Burlington Magazine and wrote a monthly round-up of exhibitions and art sales in Paris. Dell held this position until August 1914, the beginning of the First World War, when he left the arts altogether to move into political journalism.

In Paris Dell participated in left-wing art networks, befriending the famous writer Anatole France and contributing to found a group of progressive intellectuals, the Cercle Carré (des lettres, des arts, des sciences et de l’action sociale) [illustrated below]. In parallel, he organized exhibitions of British art in his own gallery and elsewhere and of French art in Britain. Dell’s contribution to art history is overshadowed by much larger figures such as Fry and Holmes but he is nevertheless important: his professional and personal connections help us to uncover lesser-known art networks between London, Paris and New York. Moreover, Dell’s writings witness the extent to which commerce permeated the critical discourse at the time, but they also illustrate how being an art dealer did not preclude the adherence to idealist ethics and to radical politics.

Secondary literature:B. Pezzini, ‘The Burlington Magazine, The Burlington Gazette and The Connoisseur. The Art Periodical and the Market for Old-Master Paintings in Edwardian London’ (Visual Resources, September 2013), pp. 154-183.

New! A much learned blog, from John Rylands Library in Manchester, has been written about Robert Dell: